These unique animals begin life as crias. As they hit the adolescent years, they’re called tuis, then grow into hembras (adult females) and machos (adult males). You may wonder, why so Spanish?

Alpacas were treasured by the ancient Incan civilisation who reserved the fine alpaca fleece for Incan royalty. Together with their close relatives, the llamas, alpacas provided clothing, food, fuel and, no doubt, companionship as domesticated animals as long as 5,000 years ago.

Alpacas were close to annihilation after the Spanish conquest of the Incas. They survived because they were important also to Indian people, and they lived with them in the extraordinarily harsh climatic conditions in the high altitudes of southern America. Alpacas remain resilient and hardy animals.
Today, alpaca farming is concentrated in the Altiplano – the high altitude regions of Southern Peru, Bolivia and Chile, where life is difficult. Alpacas not only battle a harsh climate – burning sun by day, freezing conditions at night – but also receive few of the benefits of modern farming. They survive in relatively small numbers; Peru has approximately 2.5 million, Bolivia around 500,000 and there are only some 50,000 in Chile and Argentina combined.
Last century, other parts of the world became interested in the beauty and resilience of alpacas. The first alpacas were imported to the United States and Canada in 1984, followed by Australia and New Zealand in 1989. In their new homes, they have enjoyed (relatively) more temperate climates and a developed range of animal husbandry techniques, which has led to the growth of a new industry, and greater understanding of the animals themselves.

There are two major varieties of alpaca. The first is the Huacaya, pronounced wua’ki’ya, and is the most common alpaca type in both South America and Australia.

The huacaya has a soft bonnet of fibre on its forehead and boasts ‘mutton chops’ on its cheeks, while its dense body fibre grows directly outwards, not unlike Merino fleece. Ideally, fleece coverage is even and extends down the legs. Its fleece should show a uniform crimp along the length of the staple.

The less common type is the Suri, soo’ree, and in Australia only a small percentage of alpacas are suris. The suri is covered in long, pencil fine locks, not unlike dreadlocks, that hang straight down from the body. The fleece has lustre and its feel is more slippery and silky than that of the huacaya. The predominant suri colours are white or light fawn.

Suri numbers continue to grow in Australia, and like the huacaya, the suri responds well to our gentler climate and husbandry practices. 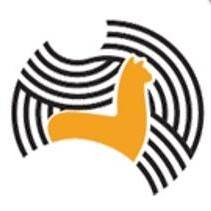 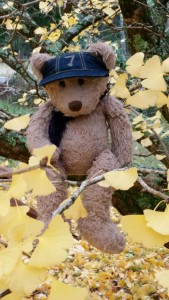 Once upon a time deep in the woods there lived a bear. Like most bears, this young cub was a thrill seeker. However ordinary escapades in the woods would not do for Russ Toffee and he set out into the world to look for a companion sharing his courageous spirit.

It was at this time that Melinda was travelling her own journey of adventure and excitement and Russ Toffee proved to be a most excellent comrade. Together they traversed the globe before returning to the place that had their hearts all along; the woods.

It only made sense that Russ Toffee form part of the foundation of the next endeavour: Toffee Woods Alpacas, by becoming the namesake and mascot for the cuddlesome alpacas that have joined the woods.